The country of Malaysia, divided by the South China Sea, consists of two distinct parts. Peninsular Malaysia and East Malaysia situated in the upper northwest area on the island of Borneo. East Malaysia comprises more than 50% of Malaysia's land area and is divided into two states - Sabah and Sarawak.

Kuala Lumpur is centrally located near the west coast of Peninsular Malaysia and is the capital of Malaysia. "KL", as locals and frequent visitors call it, is Malaysia's pride and joy. Kuala Lumpur's rapid economic growth spurs much of Malaysia's development and epitomizes the success of the country's long standing government UMNO - the United Malays National Organization.

Malaysia is a federation of 13 states plus 2 federal districts (Kuala Lumpur and Pulau Labuan) and ruled as a federal constitutional monarchy with a King (Yang Di Pertuan) as the head of state and a Prime Minister as the head of the government. Nine of the thirteen states are ruled by Sultans. These nine states are all in Peninsular Malaysia. East Malaysia, with two states (Sabah, Sarawak), was not part of the original colony of Malaya and are administered by a governors appointed by the federal government as are the two remaining states on Peninsular Malaysia (Penang and Melaka).

The King is elected on rotational basis by the Sultans who rule the nine peninsular states and serves for a term of 5 years. There are two legislative houses (houses of parliament) - the 180 member People's Council which is elected every 5 years and the State's Council with 70 members - 40 of which are appointed by the King. For all practical purposes it is the People's Council that has the real power and forms the government and is led by the Prime Minister.

Masiid Jamek
Today, this mosque is the only place in Kuala Lumpur where coconut trees still survive
the onslaught of modernity to give the place a countryside feeling. Clearly it's the most scenic coconut site in town.

Banyan and Raintrees
Most of these trees that were planted more than a century ago can be found
along Jalan Ampang, Jalan Cenderawasih, Merdeka Square, Lake Gardens and Brickfields.

Why some roads ore higher than the shophouses?
Over the years, the roads were repaved, more sewersand utilities were laid beneath, thus raising the level above the five foot walkway. The older a shophouse the higher the ground would be. When it's too high, the floor and windows had to be opened inwardly and the stairs had to be built inwardly too. Most of these shophouses can be seen along Jalan Tun H.S. Lee. 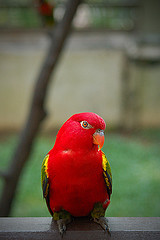